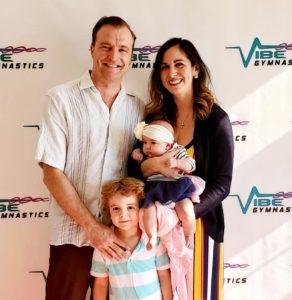 Our goal is to empower young kids and create a platform so they can experience true success, self-worth, and creativity.  We are excited to share our love of gymnastics and athleticism. We strive to build a culture that nurtures a love of fitness, as well as a deep sense of confidence and self-expression through creative movement. We believe gymnastics encourages a strong sense of discipline, which is sure to transfer to other areas of a young person’s life. We provide opportunities for the athletic advancement of children at all levels regardless of previous experience or skill level.

Dillon has many years of coaching experience ranging from Elite Gymnastics though Preschool Development.  Dillon has performed internationally as an acrobat with companies such as Cirque Du Soleil, Cirque De La Mer, and iL CirCo.  While studying Business Administration at the University of Washington, he was also on the UW Men's Gymnastics Team and the Seattle Super Sonics NBA Dunking Team.  He was a competitive gymnast for over 15 years.  As Head coach of several prominent teams in such cities such as Chicago, Seattle, and Orange County, he has led his athletes to frequent State, Regional and National titles and including  17 College Scholarships, Regional and State Champions.

Ingrid holds a bachelor's degree in International Relations (business, politics, and humanities), Summa cum Laude, from St. Mary's University. She studied abroad in London and art at the School of the Art Institute of Chicago. In 2007 she co-founded a successful online art business, which she sold 10 years later in 2017. While running her own online business, she received a Master's Degree in Fine Art from California State University, Fullerton. Shortly after graduating, she was awarded a year-long Artist Residency at Grand Central Art Center in Santa Ana, CA. The residency project was to direct a reality TV style web series that investigates why it has traditionally been so difficult for female artists to be a mom and sustain a thriving art practice. She was pregnant at the time. After the birth of her first child, she stopped her art projects and sold her business to focus on her son and the new family business: VIBE Gymnastics.